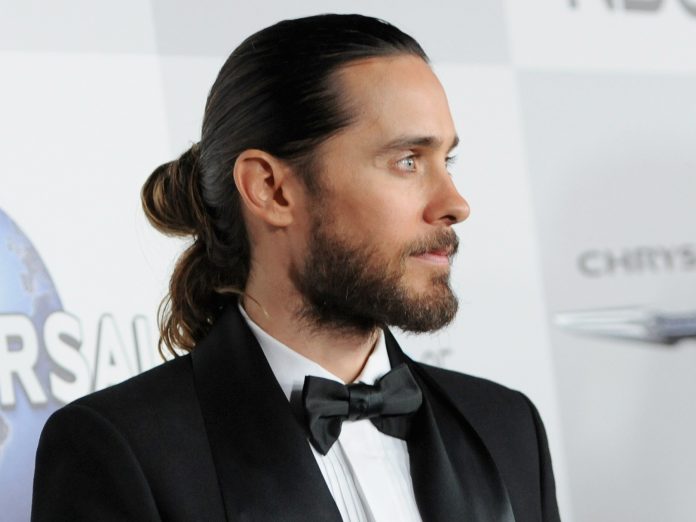 For the past few years, the popularity of longer hair among men has risen, and more and more men with medium to long hair have been seen sporting a style that has come to be known as the man bun. Taking many different forms, man buns are a two-for-one look where trendy style meets practicality, especially on days when you don’t have time to wash or style your long hair. Our top 25 manbuns will either have you reaching for a hair elastic, or waiting impatiently for your hair to grow out.

Orlando Bloom shot to fame playing roles in the Lord Of The Rings and Pirates Of The Caribbean franchises, among other epic historical and fantasy films. This low, sleek bun is a perfect match for his dashing personality. This style will keep your long hair looking clean and professional for days when you aren’t climbing aboard a pirate ship or joining a fellowship on a quest.

If you’ve gone to the trouble of growing your hair long, why not have as much fun with it as possible? This messy man bun hairstyle reveals playful ombre ends, a hair trend that women have been playing with for years. Complete with a lumberjack beard and jean jacket over vintage-patterned button-down shirt, to achieve the ultimate in casual hipster style.

Leo’s slick hair and scruffy beard provide an interesting contrast between masculine energy and traditional awards show glamour. He may have been growing his hair for a role, but you should feel free to steal this style for your everyday life.

If you’ve got a head full of natural curls, getting your long hair to look super sleek will require a blowdryer, flat iron, and at least one kind of product. If you aren’t interested in all that work, don’t be afraid to let your natural texture show. If frizz is a problem, try applying a curl defining cream to damp hair, and be sure to let it dry fully before putting your hair in a bun.

For men with quite long hair, simply folding hair under itself will create more of a loop than a nicely condensed bun. This style twists long hair up, and wraps it around itself before securing with an elastic. Perfect for long kayaking adventures or camping in the mountains, this simple bun is all about ease.

Try this suave style for your dreadlocks on a special occasion, or any day you need to keep long hair out of your way.

Sure, Chris Hemsworth is wearing this style with a suit, but loose hairs around his face and golden-colored locks add a beachy air to this look. Perfect for days when you head straight from the office to the sun and sand.

If you’re beyond eager to get your hair in a bun, try copying Jake Gyllenhaal’s barely there style. Hair at the back and sides aren’t quite long enough to be tied up, but that doesn’t mean a bun is out of the question. In this growing out scenario, product can help your shorter hairs look polished instead of puffy while they’re still too short to tie up.

There’s no better way to show off your undercut than by putting the rest of your hair in a bun. This very simple version keeps the bun close to the head for a more low-key approach to this very popular style.

Proving that buns are not just for the thirty-five-and-under crowd, Brad Pitt’s straight, blonde locks were often pulled into a low bun during his recent long-haired period. This simple bun right at the nape of the neck exudes effortless confidence and style.

If you’re eccentric and you want to show it, try wearing a bun on the top and back of your head. This is also a practical choice for hair that isn’t long enough to go into a single high bun, but it’ll likely come across as more playful and kooky than serious and sophisticated.

The high undercut continues to bask in its glory as the trendiest of men’s haircuts. In this version, most of the head has been shaved, and hair on top is just barely long enough to fit into a bun. While some men opt for shorter hair on top, this version is more versatile, and the bun becomes a good option in matters of style, and also as a last resort on bad hair days.

Actor Avan Jogia has become known for his long, thick hair. While it’s usually worn down at premieres and events, this man bun style brings all the attention to his deep, piercing stare, while a few loose hairs around his face suggest a youthful, carefree attitude. This style is definitely worth growing your hair for.

If you hate the thought of hiding all of the hair that took you so long to grow, consider putting only half of it in a bun. Half buns have been a major trend in women’s hair for quite a while, and men with long hair are finally beginning to catch on. Perfect for days when you’ve got a bit of bed head going, but your bottom layers are still salvageable.

These long dreadlocks have been tied in a loose bun, with some hair left piled on top of the head for an ultra casual style.

If you’re wondering if long hair is worth the work, consider Jared Leto to be your hair inspiration. His long, thick hair, pulled into a perfectly smooth, not too tight bun, is an example of what regular brushing, conditioning and smoothing treatments can get you. Only a lucky few are born with hair that looks this good, and the longer hair gets, the harder it is to keep damage at bay.

Musician Alex Ebert is perhaps best known as the lead singer for the band Edward Sharpe and the Magnetic Zeros, but can also include Golden Globe winner on his resume. With such a natural artistic talent, it’s not surprising that Alex sports a fairly unique hairstyle. Eschewing the typical back-of-the-head bun placement, Alex wears his bun in an ultra messy knot right on the top of his head for a wild, carefree style that suggests he’s in the midst of composing his next masterpiece.

For men in the process of growing their hair out, or those who have settled on a medium length haircut, this polished half-up bun is a trendy, yet surprisingly clean and professional, look.

Many men with naturally curly hair are hesitant to grow it long for fear that they won’t be able to style themselves professionally when needed. Natural curls can look just as refined in a low bun as straight hair, and usually just require a little more time and effort when it comes to styling and product. If this red carpet appearance from Joaquin Phoenix is any indication, we suggest start you start growing your curls out immediately.

Whether you’re headed to the grocery store or for a quick meal, this is about as casual as a man bun gets, and only takes seconds to pull off.

For the guy with medium length hair who wants to look like this is the first time he’s considered a man bun  — or maybe it really is your first time — these loose, messy buns feel spontaneous and unintentionally hip.

This might technically be a ponytail, but the contrasting textures between natural curls and a mid-height undercut make this unique style too good to leave off of the list.

Hitting on a 90s trend that’s coming back in a big way, these double buns on either side of the head have been seen on everyone this year. Definitely a bold choice for a man, this is a style that shows you’re fun, confident, and a little bit out there.

While you’re defying one gender stereotype, why not add another? These Pinterest-worthy braids and bun make for a fun and surprising twist on any man with long hair. If you lead an active lifestyle, this style also comes in handy for days when you want your long hair to be up and out of the way, since french braids like this will keep your hair locked in place far longer than hair that’s just pulled back into a bun.

Unlike it’s sleek counterpart, this wild bun is messily thrown together, letting lots of natural curls fall at the nape of the neck and around the face. The perfect blend of Castaway and craft beer enthusiast.