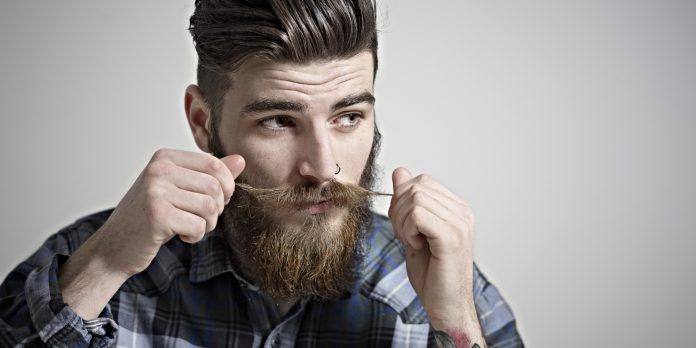 A Men’s Guide To The Best Facial Hair Styles

Just like the hair on top of our heads, men’s facial hair goes in and out of style. Various beard styles have come to be identified with certain time periods, but a modern beard renaissance has brought back all sorts of facial hair looks, and we’re living in a wonderful time where pretty much anything goes. If you’re a guy who’s thinking about changing up his beard style, or there’s a man in your life who you’re trying to convince to grow some scruff, these 30 beard styles will show you the best that modern facial hair has to offer.

Named after modern beard guru Eric Bandholz, this thick beard will require several months of growth to achieve the perfect shape. When you’re approaching your desired length, be sure to trim your beard to avoid scraggly hairs at your chin. This beard style may be on the burly side, but it’s not meant to look messy.

Named after the shape created by its two distinct portions, the anchor is a great option for men who have trouble growing a full beard, or guys who are looking for a short yet classy beard style that looks great with almost any haircut.

This pointed beard style has a long history of being one of the classiest styles of beard around, and the modern beard renaissance is bringing the ducktail back into the spotlight. The easiest way to get your own ducktail beard is to grow all of your hair out into a thick, full beard, then use a trimmer to gradually bring it in closer at the sides and shape the chin into a point or rounded point.

A smattering of short stubble is one of the easiest beard styles to pull off, and gives off an edgy, carefree vibe.

A mustache that’s combined with some hair on the chin, the balbo beard can be worn slightly scruffy or smartly polished.

If you’re all about the perfect line-up when it comes to your haircut, you probably already see your beard as an extension of those clean, crisp shapes. Have your barber trim your hair and beard at the same time, and this beard style won’t be adding too much time onto your hair routine.

Striking a nice balance between clean-shaven and full beard styles, the circle beard features hair around the mustache and chin, while cheeks are kept clean shaven. Bryan Cranston’s role in Breaking Bad has brought the circle beard some recent popularity, but you won’t feel too trendy if you try one out for yourself.

With a short haircut that’s tapered or faded at the sides, tapering back into a beard creates an incredibly slick look that shows you’re a man who puts time and thought into his hair and beard styles.

Hugely popular at the moment, the full beard is thick enough that you can’t see any skin underneath, but not so long that it extends much past the chin and jawline. This beard style is flattering for guys of all face shapes, and keeping your full beard neatly trimmed will make it acceptable for any occasion.

If you like to have noticeable hair on your face but don’t want to go for a fully bearded style, this medium stubble look is fairly easy to pull off. Once you’ve invested in a beard trimmer, you can use your desired guard to keep this length of stubble on your face all of the time.

Combining a short beard and a short mustached that don’t connect, the Van Dyke can be played up with wax, or kept ultra short for a more low-key look. The Van Dyke has become a favorite facial hair style for eccentric men like Johnny Depp, and you’ll likely be giving off an artistic vibe if you try this beard style out.

This beard style has the highest concentration of hair around the chin area but extends into a mustache and up the jawline. If you get lazy about trimming your beard and want to wear an easier, open-ended style, the extended goatee is a good option.

This forked beard gives off some pretty intense vibes, but it can be a fun style option for long-time beard wearers who are looking to switch things up. To turn your long beard into a french fork, you can separate each section and twist into place with wax, or carefully use a trimmer to carve a more permanent forked shape into your facial hair.

Consisting of a medium length mustache and an extended patch of hair between the lip and chin, the imperial beard is great for guys who are in love with anything vintage, but it also pairs well with modern hair and clothing choices.

The garibaldi is a full beard that’s trimmed into a rounded shape, and helps to flatter square or oval shaped faces. This facial hair style does feature a grown out mustache, but it should be kept trimmed shorter than other full beard styles like the Bandholz.

Forming a fairly thin line of hair that wraps down each sideburn and around the jawline and chin, the chin strap beard is a great way to help sharpen up your jawline. Trimming below the jawline is just as important as trimming above it, and any neglect will cause this style to look sloppy.

With hair that covers only the chin, the goatee is a fairly easy to maintain facial hair style that can help to elongate the appearance of your face.

Anything longer than this stubbly facial hair could be considered a full beard. For guys who don’t want to look too perfectly polished, this long stubble style helps slim your face, and is fairly easy to maintain.

With a full beard and a separate mustache that’s impeccably styled, the Verdi is the perfect blend of rugged manly facial hair and a perfectly polished style.

The classic chin curtain style features no mustache hair at all (think Abraham Lincoln), while this modern version leaves a bit of stubbly mustache hair to balance out the thicker hair around the jawline and chin.

The razor’s edge is a full beard style that’s a little bit wild around the edges. To get this look, you’ll want to combine your full beard with a grown out mustache that curls upward at the tips, and shape the sides of your beard so that they slope towards a cut-off point at the end.

The thin pencil mustache has enjoyed on and off popularity over the years, and it makes for a fun way to add a vintage vibe to your facial hair without taking tons of time to style or maintain.

Combining several elements of facial hair style, this beard fades in just as the haircut fades out, and has been trimmed to create a very sharp line that extends below the natural jawline. We love this style as a full beard option for guys who like every element of their hair to be sculpted to perfection.

One of the simplest facial hair styles out there, the soul patch look involves growing only the patch of hair right underneath your lip. This beard style won’t do much to change the shape of your face, making it an easy look that any guy can try out for himself.

This bushy fisherman’s beard is trimmed to create a square shape, but still looks warm and wild enough to be worn by a ship’s captain. When combined with a full, walrus moustache, this is the fullest and thickest beard style on our list.

A full beard isn’t in the cards for every guy, but that doesn’t mean you have to relegate yourself to the ranks of the clean-shaven. This patchy beard will add a dose of scruffy sex-appeal to your style, and pairs especially well with long or mid-length hairstyles.

The beefiest moustache in town, the walrus is a great look for guys with thick, dark hair that don’t want to deal with the maintenance of growing a full beard. While the walrus is meant to be an incredibly thick moustache, you’ll need to do at least some trimming to stop your hair from growing into your mouth.

To some guys an unshaven neck is a major faux pas, but trendy men like David Beckham have been seen deliberately sporting the style. All you have to do to get your very own neck beard is stop trimming the hair below your jaw!

This full beard has a little bit of extra hair, leaving a slightly longer shape at the chin that can help balance out a round face.